Available in both stereo and mono models, the BHK Signature series is unparalleled in its ability to render details formerly lost in the music. The BHK Signature is a hybrid design enjoying performance benefits from multiple design techniques including, a balanced differential vacuum tube input, balanced differential MOSFET power outputs, and separate, isolated, analog power supplies feeding each.

When it comes to musically controlling and powering loudspeakers, the BHK Signature has no peer. The stereo Signature 250 produces 250 watts/per channel into an eight-Ohm loudspeaker, 500 watts/channel into four-Ohms, and stable into 2-Ohms; enough power to satisfy even the hungriest of loads.

The Mono Signature 300 doubles the output current with half the impedance of the stereo model. Each Mono Signature produces 300 watts into an eight-Ohm loudspeaker, 600 watts into four-Ohms, and 1000 watts into 2-Ohms. But more than just doubling the current, the BHK Signature 300 also doubles every internal component of the 250 into one: double tubes, double power supplies, transistors, capacitors and resistors. The results are hard to put into words. The BHK Signature 300 is a clear step above the stereo 250, on the order of 20% better, though both have the same character of sound. Both the Stereo 250 and Mono 300 are one of the best performing, musical sounding amplifiers ever made. Imagine your delight listening to either. 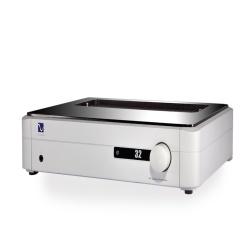